MORE THAN AVOCADO TOAST.
The 1980s marked the beginning of American diet culture. The "low-fat" diet became the superior diet to follow, alongside the rise of aerobics (hello neon green spandex and magenta leg-warmers!) and the thighmaster workout. It seemed as though much of the American society jumped on the bandwagon. Unfortunately, for avocado farmers and corporations, this meant the decline of avocado sales. According to Khazan, producers had no choice but to "battle the anti-fat movement" (Khazan, 2015). To do so, “The California Avocado Commission formed a Nutrition Advisory Committee in the late 1980s, bringing together nutrition experts from around the country to find and tout research that might help promote the healthful qualities of avocados" (Khazan, 2015).  This included flashy magazine spreads, newspaper ads, ​television commercials, and so on. It evidently took a lot to prove to the American public that avocados were indeed healthy and do not make you "fat". ​ 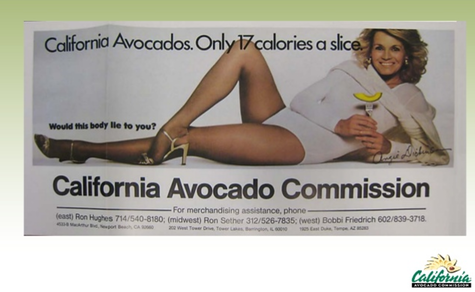 Take a look at this odd, eye-catching avocado commercial (by Avocados from Mexico) that came out during the Super Bowl 2017!
The impact of avocados on consumer society is also touched upon by Jeffrey Charles’ chapter “Searching for Gold in Guacamole: California Growers Market the Avocado, 1910-1994” in the book “Food Nations: Selling Taste in Consumer Societies”. The book as a whole provides great insight into how the popularity of specific foods shift within food markets. In the case of the avocado, he also emphasizes the difficulty faced by avocado corporations in meticulously and effectively marketing the fruit. The avocado has obvious positive elements, such as great nutritional value and a buttery richness when added to certain dishes (Charles, 2002). However, its positive elements have often become undermined by its negative, as the avocado is high fat, has limited range of cooking (as it cannot be heated), and carries ethnic associations (Charles, 2002). The latter proved to be especially problematic; the avocado was seen as solely a South American ingredient, did not fit the standard American diet, and had slim chances of becoming popular across the whole of the United States. Charles writes:

Many citizens of the United States throughout the 20th century were evidently not in favour of integration of Mexican and Latin American cuisine. As a result of such associations, with both “fat” and non-American foods, marketers specifically had to market towards the white middle class of the United States in order to brand the fruit as a healthy and high-class product. This was executed through advertisements such as the ones seen above. What is also interesting to note is the way in which the avocado was advertised almost exclusively as being a woman’s food, perhaps because the women has been long considered the "home-maker" who prepares the food of the household. You can also see the "femaleness" of the avocado clearly in the advertisements shown above. Through the health craze of the 1980s and 1990s, a time when especially women practised strict diets, avocado marketers sought to promote the fruit as a healthy addition to any meal. As a result, women became a target audience.

The positive evolution of food and diet culture was rapid, however. Especially throughout the early 21st century, avocado became a part of diets not only in the United States, but worldwide. It could also perhaps considered the a "killer" of the long-standing low-fat diet craze, as it is now considered a healthful addition in closely every diet (...make sure you are getting your healthy fats in!). Eating healthy is no longer solely a woman's practise. Avocado is a part of not only Mexican and Latin American cuisine, but Japanese, Spanish, Ethiopian, and more. It is not only an appetizer eaten with tortilla chips and salsa, but is used in a variety of desserts and sauces. Restaurants serving solely avocado-based dishes and beverages are popping up in urban areas, and avocado sales in the United States are only continuing to increase, as seen in the chart below: 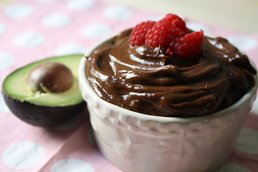 Check out one of my favourite (and insanely easy) desserts to make! This recipe comes from californiaavocado.com.

Place all ingredients in a blender or food processor and blend until smooth. Serve immediately.

​
The modern trendiness of the avocado is unparalleled, and it is one trend we can surely get behind.​