THE EARLY HISTORY OF AVOCADO 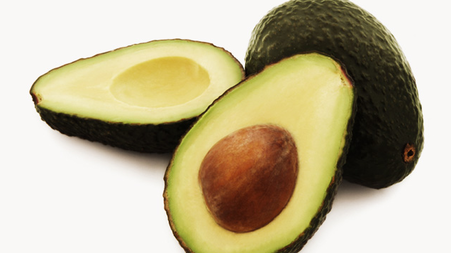 The avocado we know and love today has been a cultivated and domestic fruit throughout history. Known as a cultigen, the fruit has undergone so much human selection and drastic transformation that there is little information on its precise ancestry. From what we do know, it is safe to say that avocado’s originated in south central Mexico and the regions nearby. Human consumption of our favourite fruit dates as far back as 7000 BC in Mesoamerica, while selection processes of the fruit may have began as early as 4000 BC (Avocado Origins 2016). There are a few historical artifacts that make references to the avocado and its usage in historic eras. For one, the avocado is reference in the May civil calendar that dates back to 800BC and represents each month in the calendar based on agricultural events - the fourteenth month represented by the avocado. Surviving books from the Maya and Aztec cultures tell us that also tell us that the avocado held spiritual significance. According to Aztec myth, since avocados shaped similarly to that of male testicles, they could transfer masculine strength to those that ate it (Maestri 2017). In fact, in Aztec language the name for avocado was ahuacatl, which directly translates to testicle. Some Aztec’s were worried about the strength of the avocado being absorbed too heavily by its women that some tales claim that young girls would not be allowed outside during avocado growing season (Maestri 2017).
Using historic resources, Bernabe Cobo became the first European to describe the three main types of avocados in 1653: Guatemalan, Mexican and West Indian. Remaining Mesoamerican codexes helped Cobo decipher the three main varieties of avocados in the 16th century (Maestri 2017).

The Mexican avocado originated in Central America and is best suited to be grown in tropical highlands, its skin palpable against cold weather.

The Guatemalan avocado, while very similar in shape, have a light color to them and are best suited in medium-elevation tropics, being slightly less resilient against the cold.

The West Indian avocado, is actually not from the West Indies at all but rather from central America. They are the largest sized avocado and are not suited for cold weather, but rather need low-land tropics and are tolerant to salt. The West Indian avocado is also more round than pear-shared with east to peel skin. While these three types of avocado’s began their journey towards global domination, the fruit struggled to find itself a name. 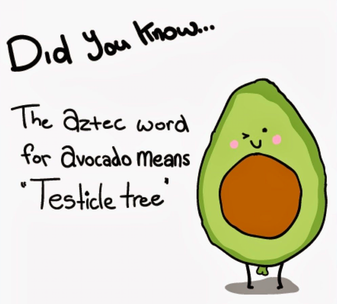 For much of time, the identity of the fruit was claimed by local vernacular, mostly derived from the Spanish word ahuacate (History: What's In a Name 2017). Yet, the journey from ahuacatl to avocado has been a bumpy and interesting one. As mentioned above, the Aztecs, who knew the fruit well, called it ahuacatl. This name is still used in parts of Mexico where the Aztec language has not been entirely replaced by Spanish. The first European to name the fruit was Pedro do Cieza de Leon from Spain around 1550, and he called it aguacate, meaning the fruit used by the Incas (History: What's In a Name 2017). In 1589 an English merchant was the first to give the fruit a name in English, and called it the alvacata. Almost two-hundred years later when George Washingston came across the fruit in 1751 he named them the “agovago pears.” Later on that name turned into alligator pear, which described the fruits pear-like shape and alligator-like bumpy green skin. For a long time that name, paired with the fruits bumpy green texture, made people stay away from it. Despite the name creativity, people began to feel like the name alligator pear was misleading and unrepresentative of the fruits true identity (History: What's In a Name 2017). It was Sir Hans Slone’s, an Irish naturalist, name for the fruit that eventually would stick  -the avocado. 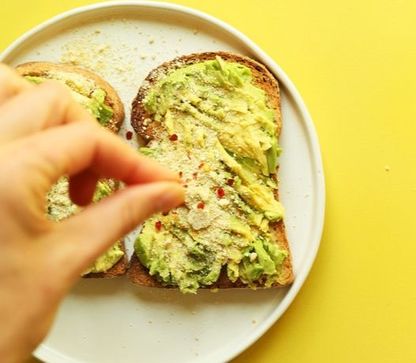 This is my favorite, quick and on-the-go, avocado toast recipe!